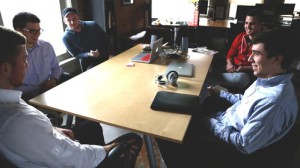 OK, last week we talked a bit about how the ‘outreach’ part of the content marketing cycle is essentially ‘professional networking’ under a different name. We’re going to keep going with that theme this week, so if you need to go read last week’s post to get caught up, go for it. We’ll wait right here.  Done?  Great!

One-Time Favors are Useless; Relationship-Building is Success
All too often, content marketers put a bunch of effort in to get their content put up on someone’s site, and once it’s up, they’ve already moved on and sent out seventeen other first-contact emails to seventeen other relevant sites. There’s no follow-up, and there’s no real sense of a relationship between you and them. That’s a massive failure on their part.

It’s far more effective, especially when the people you’re outreaching toward are genuinely solid in their spot toward the top of your market, to immediately and regularly follow up with them. Get them used to seeing your name, hearing your ideas, and thinking about what you have to say. Present them with your most creative, most controversial, most captivating material — not just so they can advertise it for you, but so that they come to understand that you have a unique take on the material. By building the relationship there, you can earn not just a one-off mention, but a recurring place in that person’s content — a steady influx of usually-increasing benefits from a steady output of usually-identical levels of effort.

To Create a Relationship, Start Small and Build Up
There are few people who love to talk about the lives of strangers except in the most abstract or anecdotal terms — which means there are few people who would appreciate it when a stranger walked up to them and said “Hey, I’m doing XYZ, let me tell you all about it!” Yet, when most content marketers send out their outreach emails, that’s exactly what they do!

Don’t be that guy. Instead, reach out to someone and ask them about what they do — because there are a lot of people who love to talk about their own lives. Reach out to them and inform them that you share their passion, and demonstrate that by asking them about a specific problem you know they’ve overcome or for their thoughts on a specific issue facing the industry. To go back to the example from last week, if you wanted to reach out to Russell Stutely, martial artist and pressure point combat expert, you could ask him how he teaches people to strike points that, realistically, shouldn’t ever be struck on a training partner. Or what he thinks of the “no touch” debate that is raging within the martial arts community.

Spreading Your Eggs
One of the hardest lessons for me at least, when it came to networking, was learning not to focus on a small number of very interesting and useful people. What you’re definitely not trying to do is befriend these guys. (Or, rather, if you do decide that you’d rather go that route, you should positively shelve 100% of your business ambitions as regards that relationship.) It’s all too easy to end up with months of outreach sunk because someone went out of business, or they were hired by a bigger company and no longer have the authority to help you in the way you’d like, or whatever.

It’s far better from a content marketing perspective to be constantly working on a dozen or more relationships, putting enough effort into each that each ‘target’ feels like you’re taking some time out for them (and thus they ought to reciprocate). That way, if any one or even five of them mysteriously become irrelevant, you still have plenty of other channels that you’re earning your way onto — and that’s how you get eyes on your content.