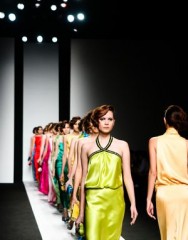 Website design is just as prone to fads and fetishes as any other field, but those aren’t really the parts that are important. Whether you work in Silicon Valley or on the edges of Detroit, web design’s true focus should always be about putting a human touch on what would otherwise be ‘just’ a masterful coding job. Here’s how we’re doing it in 2012:

Circles
This might sound silly, but it wasn’t until CSS3 that we were able to gracefully manipulate circles, curves, and bends without relying entirely on image files to do it. Because it’s a shiny new toy, a lot of web designers are overdoing it, but curves are generally much easier on the eye than right angles and straight lines, so it’s destined to become a hallmark of good design.

Fonts
With the release of new tools like Google Web Fonts and TypeKit, webmasters’ long-quashed dreams of custom fonts for every business can finally come true. This level of personalization is one that clients have wished after for decades, but today it’s something that a web designer can actually bring to the table.

Responsive Design
For many clients, responsive design — the ability to display different things based on the size of the user’s monitor — seems more like a toy than not. But if you’re marketing to mobile devices, responsive design leaps up to the forefront of your design intent pretty quickly. After all, what size display should you design for if your webpage will be showing up on the 400×800 Samsung Galaxy S II and the iPad3’s 2048×1536 Retina display?

With smartphone penetration at 30% and tablet penetration reaching 20%, this isn’t a minor detail — responsive design is going to play a huge part in web design (and particularly mobile web design) from here on out, folks. And with it…

Vector Images
Vector-based images have a lot of qualities that make them perfect for responsive websites. They scale infinitely in either direction, so they only take up the space you want them to take up on the smaller screens, but they still look great when they’re inflated to size on an iPad or other large-screen tablet.

Kiss And Tell
One of the other things that goes along with tablets and smartphones is an increased amount of people surfing while they stand in line at the grocery store, pump their gas, or watch their kids play on the swingset. And with all of that multitasking going on, surfers don’t want to have to work to get to the nitty-gritty of your website. In 2012, the websites that win are the ones that tell you exactly what you want to know and what you’re supposed to do next at a glance. If there’s any element of modern web design that defines this year’s philosophy it’s this: “Kiss and tell.” Keep it simple, and tell them exactly what to do next.

If you can do that one thing and keep abreast of even half of the latest technical innovations in web design, you’re going to be at the head of the curve until well into 2013.